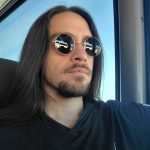 Grad of Cheyenne East High in 2008 and then went up north to the University of Idaho where he studied Virtual Technology and Design. After that, moved all over the US to cities such as Denver, CO, Portland, OR, & most recent Las Vegas, NV. He has now moved back to Cheyenne and is KYOY’s newest General Manager and co-host of “KRAE Reports” & “The ProShow” with his father. It’ll take a lot of convincing to get this bay area sports fan to root for anyone else but will certainly cover the other teams!